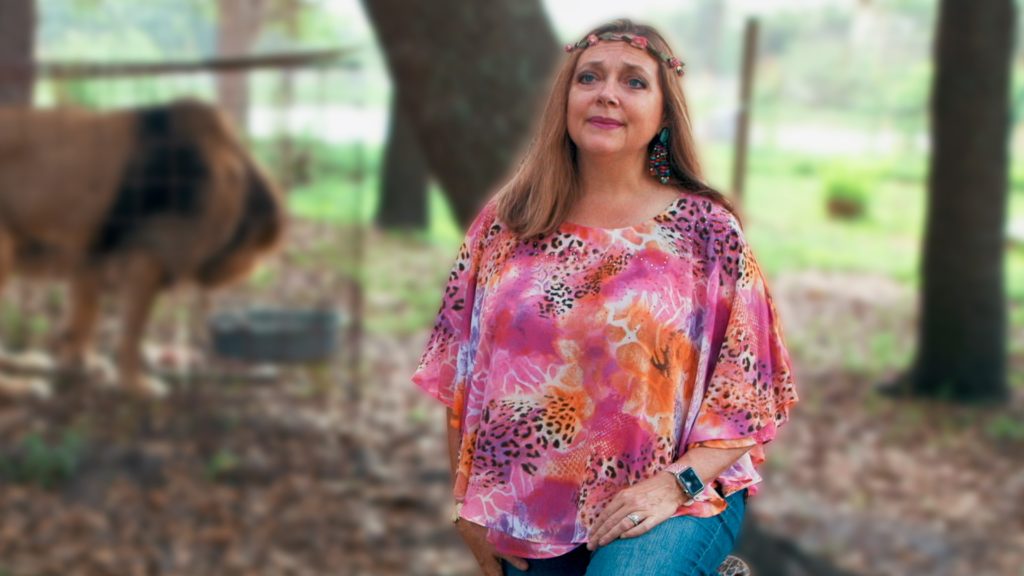 Carole Baskin is a big-cat rights activist, podcaster, real-estate business owner, and author from the United States. She is also the CEO of the sanctuary Big Cat Rescue, which is based in Tampa. Carole ran away from home when she was 15 and got a job at a department store in Tampa.

She set up a sanctuary with her second husband, Don Lewis. After Lewis went missing in 1997, she changed the name of the sanctuary to “Big Cat Rescue.” She had a fight with Joe Exotic, which was a big part of the Netflix show Tiger King in 2020. Joe was eventually given a prison sentence for trying to hire a killer to kill Carole, and Carole was given a safe place to live in Oklahoma.

How many husbands has Carole Baskin had?

Carole has been married three times. Currently, she is married to Howard Baskin and her ex-husbands are Michael Murdock and Don Lewis.

Carole Stairs Jones was born on June 6, 1961, at the Lackland Air Force Base in Bexar County, Texas, U.S.

Since she was 9 years old, it was clear that she wanted to help save cats. She did not want to study veterinary medicine, because vets kill animals.

Carole quit high school and ran away with a worker at a roller rink. Then, she took rides with strangers from Florida to Bangor, Maine, and slept under parked cars. She bought a Datsun truck after that.

Carole got a job at a department store in Tampa when she was 17 years old. She also started breeding show cats and saving bobcats around that time.

After she married her second husband, Don Lewis, in January 1981, Carole joined his real estate business.

Carole and Lewis started Wildlife on Easy Street, a place for big cats to live, in 1992. It is near Tampa. After Lewis went missing in 1997, she gave the place the name “Big Cat Rescue.” She is now the leader of the animal shelter.

Big Cat Rescue is a part of groups like the International Tiger Coalition, the Florida Association for the Restoration of Ethics, and the Tampa Chamber of Commerce. The group helps other animal shelters build cages, train volunteers, and get back on their feet after man-made or natural disasters.

Carole also owns a business that sells homes. CNN, U.S. News & World Report, Animal Planet, Discovery, People, The Today Show, Wondery, Sports Illustrated, and Netflix have all talked about her work to save big cats. On her podcast, The Cat Chat, she talks to cat experts from all over the world. She has talked about it on YouTube and Facebook to get more people involved in the fight against private zoos.

Carole has given talks in Panama, Costa Rica, Mexico, and many U.S. cities on topics like sanctuary standards and legislative issues. She has given talks at colleges and law schools (such as the Texas Lutheran University, Stetson, and the University of Miami). She has also spoken at conferences for animal groups.

Carole and other animal rights activists worked together to get the Captive Wild Animal Safety Act passed in 2003. This law made it illegal to sell big cats as pets.

In 2019, Carole Baskin also made the first augmented reality zoo in the world. In November of that year, Wondery announced that Kate McKinnon would play Carole Baskin in the TV miniseries Over My Dead Body, which was based on Robert Moor’s podcast.

She has been on the board of Humane USA PAC and worked for the Captive Wild Animal Protection Coalition as their legislative liaison (CWAPC). She gives the CWAPC information about rare cats.

She has also written many books with other people, including Lions of Big Cat Rescue, The Elusive Sand Cat, and Big Cat Attacks.

Who is Carole Baskin’s Husband?

When Carole Baskin was 17, she moved in with Michael Murdock, her boss at the department store where she worked. On April 7, 1979, they got married.

Carole said later that the only reason she married him was that her parents didn’t like that she was living with him. On July 16, 1980, Carole gave birth to her daughter, Jamie Veronica Murdock.

In 1981, Murdock was about to attack her, but she got away just in time. Then she got to know Don Lewis. Carole and Lewis started having an affair while they were both still married. They got married in 1991, after getting divorced from their previous partners.

Lewis often flew to Costa Rica to see his girlfriends there. He also tried to stop Carole from coming near him in July 1997, but the order was turned down. Lewis asked for a divorce a lot, but they kept living together.

Lewis vanished without a trace in August 1997. He was said to be dead in 2002. Carole got most of his money and property. Lewis hasn’t been seen for a long time, and many people think Carole killed him.

Carole met Howard Baskin at a party to celebrate the release of No More Homeless Pets in November 2002. Baskin became the head of Big Cat Rescue’s advisory board in the future. Baskin asked Carole to marry him in November 2003. In November 2004, they got married.

Joseph Allen Maldonado-Passage, also known as Joe Exotic, ran a private zoo in Wynnewood, Oklahoma. Carole Baskin was in the March 2020 Netflix documentary series Tiger King, which was based on his life. In the show, Carole and Joe fought over how exotic animals in private zoos should be cared for.

After the series came out, Carole became the focus of conspiracy theories about what happened to Don Lewis.

Joe was involved in trademark infringement. In 2013, a court told him he had to pay Carole $1 million in damages, which put him out of business. Joe was found guilty in 2020 of trying to hire a hitman to kill Carole. He is now doing 22 years in prison for the attempt and other crimes against animals.

In June 2020, a federal judge ruled in Carole’s favor and gave her Joe Exotic’s zoo. This made Carole the owner of Joe’s 16-acre animal park in Garvin County, Oklahoma, which is home to many big cats.