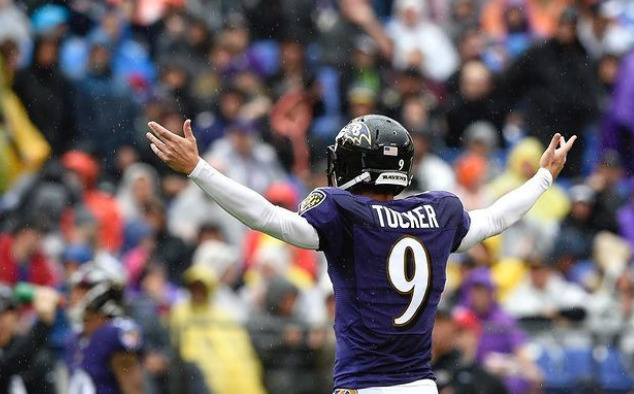 Justin Tucker is a professional American football player for the Baltimore Ravens of the National Football League. His position on the field is placekicker. He was a teammate of Nick Foles, the current quarterback of the Chicago Bears, at Westlake High School.

He was a member of the University of Texas Longhorns football team. He was then signed as an undrafted free agent by the Ravens in 2012. In his debut season, he helped the Baltimore Ravens win Super Bowl XLVII. He has the record for being the most accurate placekicker in NFL history. He holds the distinction of being the first kicker in NFL history to make field goals from distances of 20, 30, 40, 50, and 60 yards in the same game. He also owns the NFL record for longest field goal kicking (66 yards), which he made on September 26, 2021. His current team’s jersey number is 9. To defeat the Lions, Justin Tucker breaks an NFL record with a 66-yard field goal.

Justin Tucker was born on November 21, 1989. His hometown is Houston, Texas, in the United States. He is an American citizen with an American-White ethnic heritage. His ethnicity is White. Justin Paul Tucker is his birth name or true name. In the year 2020, he celebrated his 31st birthday. According to his birthday, Scorpio is his Zodiac sign. He is a practicing Catholic who makes the sign of the cross before each kick. Tucker recently sang “Ave Maria” with the Event Artists of Baltimore at a Catholic Charities benefit concert. He is also a classically trained bass-baritone who has been requested to play by the Baltimore Symphony Orchestra and the New York Opera in the past, but has been unable to do so. He was born to Paul Tucker, his father, and Michelle Tucker, his mother. Samantha and Nicole, his sisters, are his other siblings.

Justin went to Westlake High School in Austin, Texas, for his high school education. Nick Foles, the current quarterback of the Chicago Bears, was a teammate of his at Westlake. In 2008, he also participated in the US Army All-American Bowl. He then went on to play collegiate football for the University of Texas in 2012, when he was a member of the Texas Longhorns. Tucker majored in Music with a concentration in Recording Technologies at the University of Texas.

\The Baltimore Ravens signed Justin Tucker on May 29, 2012. Due to his appealing performance, he was also dubbed the starter. During his first season, he was an accurate kicker, making all 42 of his PAT tries and only missing three of his 35 field goals. In Week 3, he made a game-winning field goal against the New England Patriots. On January 12, 2013, he made a 47-yard field goal in double overtime to win the divisional playoff round game against the Denver Broncos (after known as the Mile High Miracle) and send the Ravens to the AFC championship for the second consecutive year. His two fourth-quarter field goals in the second quarter of Super Bowl XLVII against the San Francisco 49ers gave him his first Super Bowl ring. He kicked the game-winning field goal against the Cincinnati Bengals in Week 2. He was also selected November’s AFC Special Teams Player of the Month.

On Thanksgiving Day, he also made five field goals against the Pittsburgh Steelers. In an 18–16 win over the Detroit Lions in a Monday Night Football game at Ford Field in Detroit on December 16, he tied a team record with six field goals, including a personal (and franchise) record 61-yard field goal in the last minute to secure the victory. During the game, he became the first kicker in NFL history to make a field goal in each of the 20s, 30s, 40s, 50s, and 60s. His 61-yard field goal was also the longest in a domed stadium in NFL history.

In addition, at the conclusion of the 2013 season, he was selected to his first Pro Bowl. Tucker was later given the franchise tag by the Ravens on February 26, 2016. On the 4th of March 2016, he signed a four-year, 16.8 million dollar deal with the club, which would pay him $4.5 million. On the 15th of July 2016, he signed a four-year, 16.8 million dollar agreement with the team, which would pay him $4.5 million.
In a 19-14 victory against the Cincinnati Bengals in Week 12, he made four field goals, three of which were over 50 yards, earning him AFC Special Teams Player of the Week honors.

Who is Justin Tucker’s wife?

Justin Tucker is a husband and father. He married his lovely Amanda Bass, who is also known as Amanda Bass. Their wedding is scheduled for March 2015. The couple also has their first kid, Easton, who was born on May 10th, 2016. The happily married pair is now residing in Maryland, United States of America. In terms of sexual orientation, he is straight.

Justin Tucker is an American football player with a net worth of $25 million as of 2022. His current pay is $3,500,000 per year, including a $1,600,000 signing bonus. He has previously been hired by Royal Farms to perform in their ads in 2015. His main source of income is the sports sector, and he is content with her wages. He is now enjoying a wealthy lifestyle.

Justin Tucker is a handsome young guy with a lovely demeanor. He stands at an ideal height of 6 feet 1 inch (1.85 meters). His ideal weight is 183 pounds (83 kilograms). He has an athletic body type. His additional bodily measurements are currently unavailable. Overall, he has a healthy physique and a calm demeanor. His eyes are a light green hue, while his hair is a black-brown tint.

Justin Paul Tucker is his actual name. His zodiac sign is Scorpio. Tucker recently sang “Ave Maria” with the Event Artists of Baltimore at a Catholic Charities benefit concert. He is also a classically trained bass-baritone who has been requested to play by the Baltimore Symphony Orchestra and the New York Opera in the past, but has been unable to do so due to scheduling conflicts. Nick Foles, the current quarterback of the Chicago Bears, was a teammate of his at Westlake. He is now a member of the Baltimore Ravens.