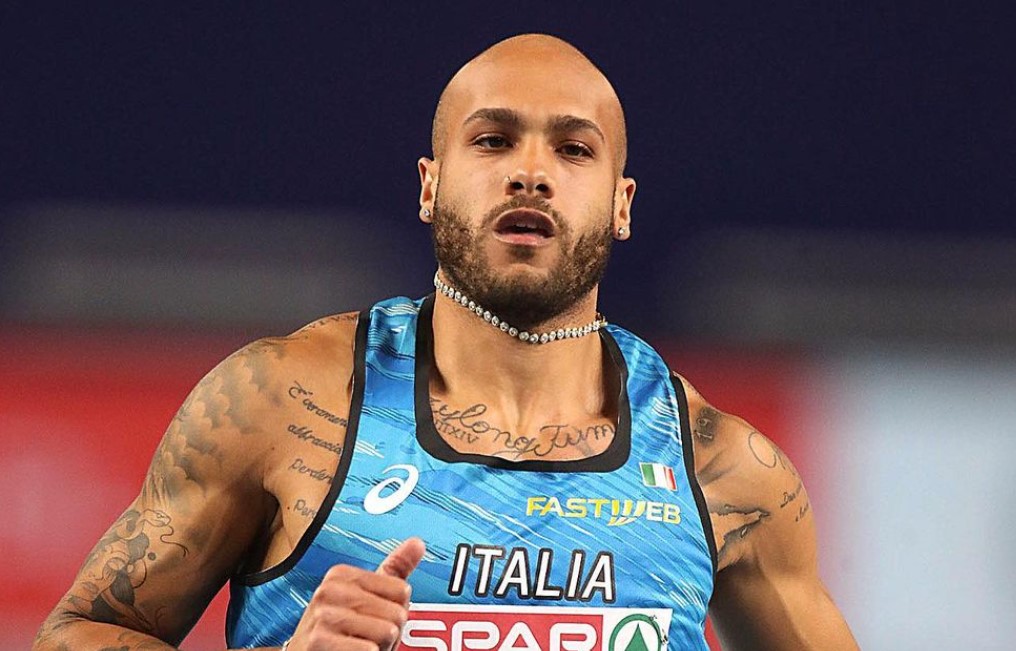 Lamont Marcell Jacobs Jr. is a sprinter and long jumper from Italy. Jacobs is most remembered for being the first Italian to win gold in the 100 meter dash at the 2020 Tokyo Olympics.

With a timing of 9.80, he also established a new European record in the 100 meter dash. He has previously won the European Athletics Indoor Championships in 2021. In addition, he concluded the 2020-21 season as the World Leader in the 60-meter dash.

He favored running at first, but in 2011 he decided to try the long jump. In 2016, he won the long jump at the Italian Athletics Championships. He finished the 2017 indoor season in 10th position in the IAAF rankings (now World Athletics). His personal best is 8.07 meters. At the 2016 Mediterranean U23 Championships, he jumped 7.95 meters. At the 2016 Italian U23 Championships, he jumped 8.48 meters. Due to a 2.8 m/s tailwind, his performance was not recognized as a national record. With a time of 38.11, he holds the 4*100 m national record with Federico Cattaneo, Davide Manetti, and Filippo Tortu. In October of this year, they broke the national record in Doha. With a speed of 6.47, he owns the national record in the 60 meter dash, which he achieved in Torun in March 2021. In May 2021, he established the Italian record in the 100 m with a timing of 9.95. After winning the Italian championship with a time of 10.1 in 2021, he earned his fourth national title in a row. He won it three times before, in 2018, 2019, and 2020. He qualified for the 2020 Tokyo Olympics as an Italian representative. With a time of 9.80, he won the gold medal in the men’s 100 m. With a time of 9.84 in the semi-finals, he had already beaten the European record.

Who Is Lamont Marcell Jacobs’ Wife?

Lamont Marcell Jacobs is a husband and father. He has a wife named Nicole Daza. The couple is parents to two children. Anthony, their first kid, was born in 2019, and Megan, their second child, was born in 2021. He also has a son from a prior relationship, Jeremy, who was born in 2013. The family resides in the city of Rome, Italy.

Lamon Marcell Jacobs is 6 feet and 2 inches tall, with a height of 1.88 m. He weighs 174 pounds, or 79 kilograms. He has a muscular physique. His eyes are brown, and his hair is jet black. He shaves his head on a regular basis. He has a heterosexual sexual orientation.

Net Worth Of Lamont Marcell Jacobs

Lamont Marcell Jacobs makes a living as a professional athlete. He is the first Italian to win an Olympic gold medal in the 100 meter dash. Prize money, bonuses, sponsorships, and endorsements are all sources of revenue for him. His net worth is reported to be in the millions of dollars.

His father was a US Army veteran who fought in Italy at Caserma Ederle. In 2010, he became an Italian citizen. He is the 150th individual to break the 10-second barrier in history. With a timing of 9.80, he established a European record in the 100 meter dash. In the year 2020, he speaks to his estranged father for the first time. In addition, his 9.80 mark in the 2020 Tokyo Olympics is the quickest by an athlete from a country other than the United States or Jamaica. He is the first Italian to win an Olympic gold medal in the 100 meter dash.