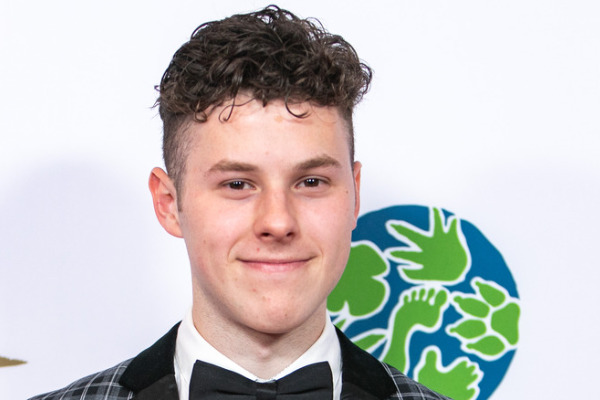 Nolan Gould is a famous actor from America. He is mainly recognized for his role as Luke Dunphy in the famous ABC sitcom named “Modern Family”. He was a member of the respected organization named “Mensa”.

The Ellen Degeneres show has claimed that Nolan has an IQ level of 150. He won a Screen Actors Guild Award for his outstanding performance in the sitcom “Modern Family”.

Nolan Gould was born on October 28, 1998, in New York, America. He is currently 23 years old as of 2022. His zodiac sign is Scorpio and holds American nationality.

Nolan’s father’s name is Edwin Gould and his mother’s name is Angela Gould. He has one sibling named Aidan Gould. When Nolan was five years old, he and his parents moved to California due to his father’s military career.

When Nolan was 13 years old, he graduated from high school by taking a General Education Development test. After that, he took online college courses till the age of 18.

How old is Nolan Gould?

In 2009, Nolan got his first main role in the movie “Space Buddies” which was directed by Robert Vince. The film also represents other talented actors like “Jason Earles”, “Lochlyn Munro”, “Kevin Weisman”, and many more. In the same year, Nolan appeared in the movie “Hysteria”.

Nolan rose to fame when he appeared in the famous ABC sitcom titled “Modern Family” in 2009. He played the role of Luke Dunphy. The series defines the story of Jay Pritchett and his family living in Los Angeles. It features other actors like Eric Stonestreet, Sofia Vergara, Julie Bowen, Ty Burrell, Sarah Hyland, and many more.

The show has won a total of 22 Primetime Awards and 6 Writers Guild of America Awards. Gould has also played guest roles in other TV series like “Sofia the First”, “The Haunting Hour”, etc.

Nolan has also played the supporting role in a comedy movie named “Friends with Benefits”. The movie features famous actors like Justin Timberlake and Will Gluck. He also appeared in other movies like “Ghoul”. “Field of Lost Shoes”, “The to-Do List”, etc.

What is Nolan Gould’s IQ?

The Ellen DeGeneres show has clarified that Nolan’s IQ level is 150.

What is the Net Worth of Nolan Gould?

Nolan Gould earns a good amount of money from commercials and acting. Moreover, he has an estimated net worth of $12 million as of 2022.

Is Nolan Gould dating someone?

Nolan Gould is currently living a single life. Previously, he was in a relationship with Joey King. Once, it was rumored that Nolan is dating his on-screen sister, Ariel Winter. Later, Nolan stated that “he loves Ariel but as a good friend”.

Why is Nolan Gould famous?

Nolan Gould is famous for his role as Luke Dunphy in the series “Modern Family”.

Nolan Gould is 5 feet 11 inches or 180 cm and weighs 71 kg or 156 lbs. There is no further information available regarding his other body measurements.