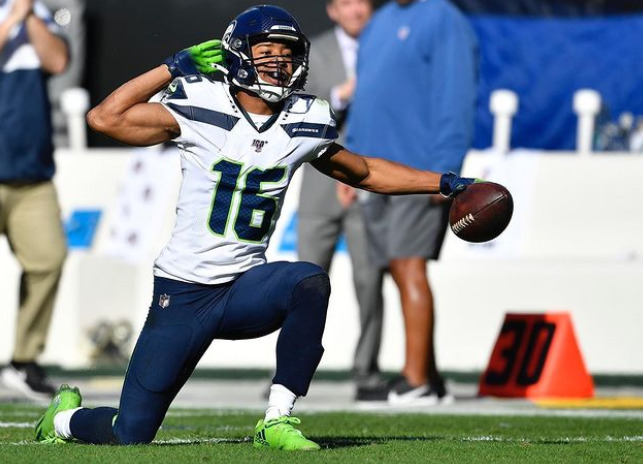 Tyler Lockett is an American NFL footballer who is playing in the position of wide receiver for the Seattle Seahawks. He was drafted by the Seahawks in the third round of the 2015 NFL Draft. Previously, he played college football at Kansas State University where he totaled 6,586 career all-purpose yards and 35 touchdowns, including 3,710 yards and 29 touchdowns as a receiver. In his freshman and senior seasons, he was a Consensus All-American. He attended Booker T. Washington High School in Oklahoma, where he led the football team to its first OSSAA title in 24 years. He was selected to the 2015 Pro Football Writers Association (PFWA) NFL All-Rookie Team at three positions. He is the son of a professional former football player, Kevin Lockett. Whereas his uncle, Aaron played at Kansas State from 1998 to 2001. On 29th August 2018, he signed a three-year, $31.8 million contract extension with the Seahawks through the 2021 season, and on 2nd April 2021, he signed a four-year, $69.2 million contract extension with $37 million guaranteed with the Seahawks. He has a nickname, ‘The Rocket’. His jersey number is #16.

What is Tyler Lockett Famous For?

Tyler Lockett was born on 28th September 1992 with the birth name of Tyler Deron Lockett. His place of birth is in Tulsa, Oklahoma, the USA. He was born to his father, Kevin Lockett, and his mother, Nicole Edwards. His dad, Kevin is a former American football wide receiver and punt returner in the National Football League for the Kansas City Chiefs, Washington Redskins, Jacksonville Jaguars, and New York Jets. His uncle, Aaron, who played at Kansas State from 1998 to 2001, was their fourth all-time leading receiver as well as their second all-time leading punt returner. He also has three siblings, brothers named Sterling, Jacob, and Jordan Lockett. His paternal grandparents are John and Beatrice Lockett and his maternal grandparents are Marvin D. Hopson and Shirley Edwards. He holds American nationality and his ethnicity is American-African. His race is black. Tyler was born under the Zodiac sign, Libra and he follows Christianity religion. He celebrated his 29th birthday as of 2021 with his family.

About his education, Tyler Lockett attended Barnard Elementary, Carver Middle School, and then Booker T. Washington High School in Tulsa. He was involved in the sports like football, basketball, and track and field during his school time. He helped lead the Booker T. Washington Hornets to Oklahoma Secondary School Activities Association (OSSAA) championships in both football and basketball. He was regarded as a three-star recruit by Rivals.com and was ranked as the number 16 player in the state of Oklahoma and the No. 170 nationally by ESPN.com. He then received an athletic scholarship to attend Kansas State University and played for the Kansas State Wildcats football team from 2011 to 2014.

Tyler Lockett is not married yet and he is currently in a relationship. He is dating his beautiful girlfriend, Lauren Jackson. Lauren Jackson is originally from Houston, Texas who graduated in 2019, from Texas State University with a Bachelor’s degree in fashion merchandising. She has done some modeling for Ashley Dunn and FMA; later on, worked as a sales associate for Forever 21, was an administrative assistant at Texas State, and is a key holder for Michael Kors. There is no news and rumors about his relationship, affairs, dating history besides Lauren Jackson. Along with his relationship, he also balanced his football career. He has chosen to abstain until marriage. The love bird is enjoying their present life a lot at present and they are planning to get married soon. His sexual orientation is straight and he is not gay.

Tyler Lockett is an NFL footballer who currently plays position WR for Seattle Seahawks in the National Football League, the senior football league in the United States. The net worth of Tyler Lockett is estimated to have $11 Million as of 2021. His net worth is incresting gradually every year as his net worth as of 2020 was $10 Million and his net worth as of 2019 was $8 Million. Recently on 2nd April 2021, he signed a four-year, $69.2 million contract extension, which includes $37 million guaranteed. His annual salary as of 2021 is $17.3 Million. Back then, he signed a three-year, $31.8 million contract extension with the Seahawks through the 2021 season. Prior to his recent contract, he was earning $10,250,000 as an annual salary from his team Seattle Seahawks. He is living a lavish lifestyle as of today and he has made a huge fortune from his NFL career. His main source of wealth comes from his football career.

Tyler Lockett is a handsome man with an athletic body type. He stands tall at the perfect height of 1.78 m or 5 ft 10 in. His body weight consists of 83 Kg or 182 lbs. His other body measurements such as chest size, waist size, biceps size, and more are still to get disclosed yet. Overall, he has got a healthy body and he frequently does exercise to keep himself fit and fine. He is very conscious about his food intake.